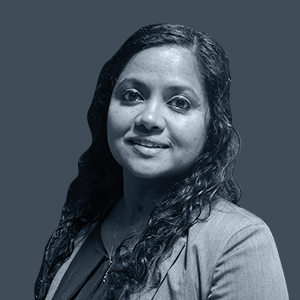 Anuradha is the Founder & CEO of Prakat Solutions, a thoroughbred software technology and quality professional with over 25 years of experience in building up independent software testing teams who excel in a global service delivery model.

Anuradha, commonly referred to as Anu, has been an evangelist for independent testing through the journey where customers were outsourcing the entire lifecycle and not paying specific attention to testing. She also has extensive experience in organization building, service portfolio creation, business planning, enabling the sales force, skills development etc.

Anu embarked on her entrepreneurial journey as an “intraprenuer” at Infosys where she grew the group right from the concept stage. Key highlights included Organization building, Service portfolio creation, Business planning, Salesforce enabling, Global service delivery teams and Skill development. These experiences helped her have a fulfilling career at Infosys where she grew the business unit to over 8000 people & 450 million USD in revenue.

Prakat focuses on end to end engineering solutions including – Product, Test & Accessibility Engineering and Application Modernization. The company carries with it a strong social vision – which is to create jobs and foster professional opportunities for persons with disabilities. The company has also created solutions across the global market and for various industries.

Under her leadership, Prakat bagged the Best Startup award at StartupCity. Anu received the Wequity – Solidarity Idol Award for her support towards women in tech and also the eMERG- Entrepreneur of the Year. She also serves as the state representative for the NASSCOM SME Council. Prakat was named in the SI-1OO list of the top 100 Indian owned technology companies by Silicon India in 2010 and recognized among the 10 Most Promising Testing Companies. Anuradha was also part of the Indian software industry delegation to Argentina, the Atlantic Canada – India Supplier Diversity Mission to various parts of Atlantic Canada, the Canada-India Business Women’s Forum in Toronto, Women’s Business Enterprise National Council (WBENC) National Conference in Orlando, the Grace Hopper Celebration of Women in Computing 2012 in Bangalore etc.  She has also been interviewed multiple times by publications like Economic Times, The Hindu, The Enterprise Magazine etc.